Chick-fil-A and My Conscience 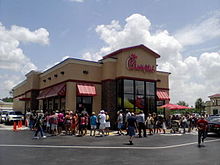 Well, it only took 51 years but it finally happened…Chick-fil-A opened its first store in Buffalo and people are losing their GD minds. They started lining up the.day.before it opened. Radio stations are talking about it. My students have been talking about it for weeks. Facebook has been buzzing about it. It’s everywhere.

Well, we are and we aren’t.

Yes, we’re technically talking about chicken sandwiches, waffle fries, and a secret sauce that isn’t secret because it’s just a bunch of other sauces mixed together.

We’re talking about a GENIUS-level marketing idea called the “First 100 Campout” where the first 100 people to line up the day before a new location opens get free Chick-fil-A for a year. Of all the free food I’d want to eat for a year, this wouldn’t top my list but groceries are expensive, so I get it.

We’re talking about a fast food place voted “most polite chain restaurant” in 2016 because their employees say things like “please” and “thank you”. Granted, they’re also required to respond to every interaction with “my pleasure” which customers say gets a little Handmaid’s Tale-ish creepy.

We’re talking about a company that gives their employees Sundays off. Yes, yes I know it’s for religious reasons, but all of the employees still benefit and as a longtime Human Resources professional, I know they can be closed any damn day they like.

But, here’s the thing, we’re also talking about a business that hasn’t gotten the memo (as evidenced by their ads and a gender discrimination lawsuit) that today both moms and dads have parenting responsibilities and not every woman wants to be a stay-at-home mom. Jesus, will we ever get past this stereotype?

Speaking of Jesus, here’s the other thing, they’re a Christian-based business or as they put it, Chick-fil-A is a business built on biblical principles. Not everyone loves this but the reality is they get to base their business on whatever damn principles they want.

Frankly, the biblical principles drive how they treat their employees and according to Indeed, 10,000+ employees score them 4/5 stars as an employer because they genuinely like working there. Again, with my HR hat on, good for Chick-fil-A.

But, if I take my HR hat off and put my human being hat on, my perspective shifts.

Did they donate money to certain groups who oppose same-sex marriage? Not directly from Chick-fil-A but they did through their foundation.

Are they explicitly anti-LGBTQ? Not explicitly but they have donated to groups who oppose same-sex marriage and the founder has said they only support the “biblical definition of marriage”. Both of these exclude and/or condemn the LGBTQ community.

So, if you eat there do you hate gay people? If you eat there BECAUSE they indirectly fund anti-LGBTQ organizations, then there’s probably some hate in there somewhere.

If you eat there because it’s fast, cheap, gets your toddler to stop crying, and you feel horribly guilty for doing it, then probably not.

But, money tells businesses what consumers accept and expect from them. So, if you eat there, then you’re telling this business that it’s cool some of your money is going to fund anti-LGBTQ organizations.

For me, that makes it a chicken sandwich my conscience just can’t swallow.