Just as You Are

We’re in that limbo between Xmas and NYE, this year and next, the old you and the new you. I have no idea what was wrong with the old you but the marketers think the old you isn’t good enough so you better buy what they’re selling so the new you will be good enough, at least until next December.

I’m a full-blown grownup. I have the Dyson vacuum to prove it. I know what they’re doing and still I feel the doubt creep in that they might be right.

Last year I needed to get myself together so I bought a fancy planner. It was beautiful and organized and…wait for it…paper. Yep, paper. I haven’t used a paper planner in a decade but this one was so pretty I was sure I would use it. I did but it was paper so it was heavy and bulky and only fit in my big bag. I now use it mostly for scratch paper.

The year before that, I needed to take better care of myself so I ordered revolutionary multivitamins made specifically for women that would arrive on my doorstep each and every month. I now have several bottles of them in my cupboard. The next time you stop by, don’t be surprised if I offer you some multivitamins. I want you to be healthy too!

The year before that, my skin was starting to show signs of my actual age, god forbid, so I signed up for a monthly skin care regimen. It worked so long as I followed all 547 steps of it. What? You don’t spend 2 hours on your nighttime skin care routine? Yeah, me either.

Now, we’re at the end of this year and here I am again, clicking on ads for shoes that make you look 20lbs lighter, meditation for dummies and people who fall asleep at the sound of a chime, pants that don’t feel like pants (someone let me know about these). Will I buy any of them – I might. I might not.

But here’s the thing, after decades of wanting to be more of one thing and less of another, I’ve come to realize that my BFF @Oprah is right…just as we are, we are enough. 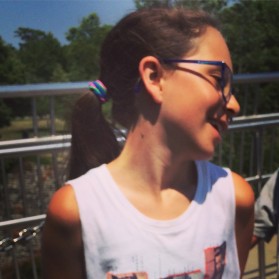 I didn’t really know what that meant until I had a daughter.

Having her shifted my perspective because I genuinely felt what it was to unconditionally see another person as enough, no exceptions – no matter her age, ability, height, weight, hairstyle, and even mouthiness.

I see my friends that way too. Whether they have pink hair, clean houses, old cars, new husbands, big tattoos, little bank accounts, extra weight, high anxiety, deep insecurities, irrational fears, none of it matters. Just as they are, they are enough. This is truth even if they don’t know it.

What’s also true, albeit harder to know, is that just as I am, I am also enough.

No matter if I never know when to keep my mouth shut, never go along to get along, never meditate, never lose the weight, never have a big house, never have deference to authority (because authority is just an illusion anyway), never learn to be more patient, never drive slower, never let go of my grudge against that gas station on Union Rd., never love kale, never have an appropriate sense of humor, never apologize for being a feminist, never keep my cool on the phone with the cable company, never stop using the “f” word too much, never watch Game of Thrones, never like Wayne Dyer (ever), never learn to manage my face so it doesn’t reveal my every thought.

If I never ever do any of these things, still…just as I am, I am enough. And so are you.

Change nothing, change everything – either way, just as we are, we are enough. Much love to everyone in the New Year.