To Be or Not To Be Catholic? 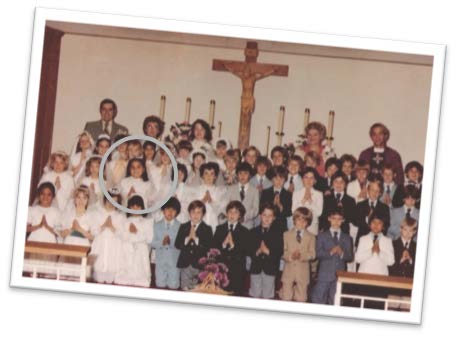 Here’s how I’ll sum up my Catholic upbringing…it didn’t stick. And, frankly, it was kinda doomed from the start. Catholics are often baptized within a few weeks of being born. Me? I was baptized at 10. I’m the youngest of 4 so maybe that had something to do with the decade-long oversight.

Shortly after being baptized, I did my first Communion. Best part of that was wearing the fancy dress and veil. Eating the cardboard host and drinking the vinegar, I mean wine, really not the highlights they were played up to be.

Around 7th or 8th grade, it was time for my Confirmation. In short, this is where you’re “sealed” with the Holy Spirit making you a 100% solid Christian. I guess before that you were only 70-75% Christian? Not sure how the math works on that.

I don’t remember if I was just being a pain in the ass or if I was making a legit rationale, well-thought out decision. Either way, I said no thanks and headed to the golf course with my Dad. Be serious. It was the 80s when kids still had to do shit they hated. I kept going to church every Sunday and making my sister suffocate on giggles until we both got yelled at.

There’ve been times as I got older that I worried about this decision. What will I do when I get married? Can’t get married in the Church if you’re not confirmed. What if I have a baby? It used to be believed that if a baby dies without being baptized they go to Hell. I’m not sure what mortal sins a baby can knowingly commit but apparently St. Augustine was not having it.

Well, I did get married but, loophole! I married a man raised Catholic turned Agnostic. Don’t know what that is? Well, here’s my favorite definition: “A person who is sensible enough to admit they have no f$%^*&g clue what is going on in the Universe”. Can’t get married in the Church if you don’t believe in God even though you also don’t not believe in God.

Then, I had a baby. No baptism, no vaccines (Kidding! For god’s sake, calm the f%^& down. She’s vaccinated…mostly. I’m kidding, I’m kidding. Jeez).

It’s weird being raised in a massive religion that you’ve walked away from and then having to decide what to do about your own kids because, what if? Do you do it so they can decide for themselves whether to accept it or not? Do you not do it because you refuse to possibly green light a level of hypocrisy so mindblowing that you had to abandon the only religion you ever knew? If you do nothing are you a terrible parent who has damned her child’s soul for eternity and not vaccinating her will be the least of your worries (kidding again!)?

At the holidays when she was a baby, I would sing her to sleep with Silent Night. Over the years, I sang lots of Xmas songs to her – Jingle Bells, Frosty, Rudolph. She sang with me. But when I sang Joy to the World, Adeste Fidelis, and The First Noel she didn’t sing. She’d never been to church so she didn’t know those songs. There was so much she didn’t know – angels, Jesus, Heaven, Hell, frankincense…I mean, she didn’t know why Christians even celebrate Christmas!

I was sad for her and I felt responsible.

Truth is, I AM responsible. But the rest of the truth is I’m not sad about it anymore. My perspective is we don’t need to be part of an organized religion in order to raise good people. And being part of one certainly doesn’t guarantee you will.

Being kind, honest and respectful are values she learns at home and at school. She knows about frankincense because it’s in our diffuser (can you say expensive? I see why the kings thought it was a good gift). She knows about angels because her grandma Diane is an angel who now dances through a lovely garden in Heaven. She knows Jesus personally but she calls him grandpa.

And Hell? Well, every time I take away her iPhone, she knows what that is too.